Download PDF Forever in Darkness (Order of the Blade) 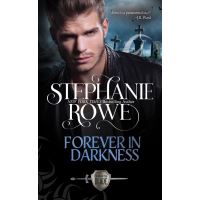 Except he's stronger this time around, with 9, health. Are you scared? Thought not. Smash his shield with a special move and then proceed to hack him to pieces with conventional moves no elaborate specials else he hits you mid-way through. Alternatively, the safer method is to keep your distance but don't go too far as if you venture off the white-coloured floor; the 'arena'; then he'll disappear in a puff of smoke.

No, not for good, he comes back with all his health restored. And the really harsh thing is that he can venture out of this arena without penalty. Might as well get on with killing him. About 3 hits will do. After his health drops below 3,, he starts to get frantic and teleports behind you constantly. No sweat: simply jump forward, turn as he swings and try to counter-attack before he teleports again. Sometimes, he'll stay where he is and try to advance on you; slaughter him when he does; he needs punishing!

After you slaughter him, go onwards down the set of revealed stairs. A Demon seems to think that it can defeat you. Prove it otherwise.

Upon its defeat, 2 more Demons teleport in and ask for the same treatment. Give it to them. After continuing on a linear trek, you'll arrive at a huge set of stairs with 4 Skeletons at once! Oh gosh! Not only do they kill themselves, but they also bunch up together, so circle around them, back away and use Ianna's Sight to slaughter 3 of them at once. The other will be so weakened that it won't put up much of a fight. One hit will do. They look worrying, but they're not. It's funny: with the Knight, when I used the Sword of Ianna, their 'glowing ball' ranged attack did no damage at all and didn't even interrupt my casting of Ianna's Sight, but with the Barbarian, the attack did do damage.

Not much mind - so little, in fact, that it's rather pathetic. At best, the attack did '8' damage and sometimes as little as '2' damage. Whereas my superb Ianna's Sight does over 1, damage every time.

Maybe it's down to my Defence rating Anyhow, the Chaos Knights are big and so you'll probably be able to hit both at once. Attack them at range and you'll slaughter them. Just wait until they've fired off their salvo of ranged attacks before countering, else they interrupt you.

Oh, and if you time it well enough, their glowing ranged attacks can hit each other or themselves. They also can be blocked. Watch out for their swords; it's not worth the risk to get close. Jump over the gap through the open door and go onto the centre of the platform to discover that it's a lift. The only risk here is falling off the lift. If you keep your distance and keep using Ianna's Sight you'll have no problems. Then get off the lift and go into the adjoining room.


Kill them and move on into the Inner Sanctum. Oh, sounds scary. Well, you've only got 2 more enemies in the entire game. Gosh, just when you'd thought you'd killed him no, it's not the Vampire again , Meskalamdug or a Demon looking just like him pops out of nowhere. Didn't I show you before? Yes, you did, but he's a bit of an arrogant demon and has killed a few Orcs before taking you on again, because now he's level Not that it makes much of a difference, you should use the same tactics as in your first battle keep your distance and use Ianna's Sight.

Except, when his blows didn't hurt too much before, they hurt now. Quite a lot. But what are you doing getting that close? After you mortify Meskalamdug, another hidden door reveals itself.

Feel every word with award-winning performances

Hopefully, you should have hit level 21 and saved it when you did! By now and you should have all of your potions intact. If not, then you could have done better, but there's not much point in reloading now Go down into the crypts to witness the Lord's speech and then him getting beaten up by a piece of armour. No wait, he's not getting beaten up, he's getting picked up. Sorry, a very bad typo there. You may be a little shocked at the fact that he's got 80, health, but he is the Lord of Darkness.

He has to be tough! Luckily, you're tougher! Quite apart from winning the 'silliest-looking-big-boss' award, Akaris also has a measly melee attack. So if you have a huge melee weapon with a eviscerating special combo, you should go up, perhaps use your power potion, and then teach him the meaning of pain. You can try and go with Ianna's Sight, and that's probably the safer way, in all honesty, but it takes a boringly long amount of time.

Still, if you want to do it, here's how it goes. Keep backing away from him, firing off salvos whenever you can. When he switches position, avoid the pink bolts he shoots at you and then continue the tactic. When he gets below 30, health, fire off your own salvos while avoiding his big pink ball that follows you by running behind a pillar.

He'll die eventually. For those of us who like a bit of risk, then here's how you kill him. Go up to him and perform your special attack. Immediately after that hits him, dodge backwards several times. His huge swipe will miss it also works if you dodge right repeatedly if he swings with his left hand or dodge left repeatedly if he swings with his right.

Then you repeat the tactic several times, remembering to monitor your energy level. After he gets to below 30, health, he teleports away and fire pink bolts at you. Dodge them and then, if he fire a massive pink tracking bolt, avoid that tactic described above. Go up to him and repeat the hacking and slashing, dodging and using special moves.

He'll go down pretty quickly. The only thing that'll really hurt you are his pink-tracking balls which only come into effect when he goes below 30, health and are countered by running behind objects so that the bolt collides with that and not you and the lightning bolt which he shoots out from his armour he can do this whatever health total he may have and there's no real counter. Just keep dodging and diving to the side; when you get hit, start dodging to the opposite side and never stand still.

When you finally beat him, then you get the final cut-scene, showing him being destroyed and then you replacing the Sword of Ianna.

thepanamamama.com/3423.php What the hell? Still, you can feel all proud, and you get to see the Credits, with a rather amusing drawing of a 'death-chicken' at the end. Just don't expect to feel satisfied with the game's conclusion, that's all. Position yourself in front of the steel bars, wait for the golem to see you there.. PS: hey dude can you send me the rune locations on 1.